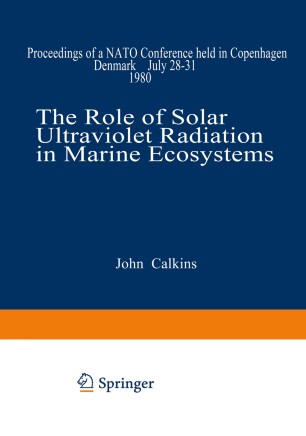 The Role of Solar Ultraviolet Radiation in Marine Ecosystems

The inspiration for this monograph derived from the realization that human technical capacity has become so great that we can, even without malice, substantially modify and damage the gigantic and remote outer limit of our planet, the stratosphere. Above the atmosphere of our ordinary experience, the stratosphere is a tenuous layer of gas, blocked from rapid exchange with the troposphere, some twenty kilometers above the surface of the earth, seldom reached by humans, and yet a fragile shell which shields life on earth from a band of solar radiation of demonstrable injurious potential. It is immediately obvious that if stratospheric ozone were reduced and consequently the intensity of solar ultraviolet radiation reaching the earth's surface were increased, then human skin cancer, known to be related to solar ultraviolet exposure, would also be increased. But how does one even begin to estimate the impact of changed solar ultraviolet radiation on such a diverse. interacting, and complex ecosystem as the oceans? Studies which I conducted in Iceland focused on this question and were noted to the Marine Sciences Panel of the Scientific Affairs Committee of NATO by Professor Unnsteinn Stefansson, leading to a request to investigate the possibility of organizing a NATO sponsored Advanced Research Institute on this topic.