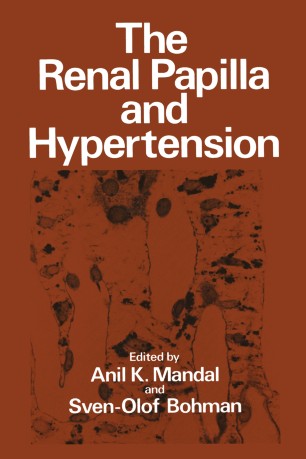 The Renal Papilla and Hypertension

LOUIS TOBIAN There are many reasons for suspecting that the medulla of the kidney is involved in the pathogenesis of hypertension. Although our present knowledge does not permit the assignment of a precise and exact role for the medulla, there are so many indications of its involvement that this is an appropriate time for the subject to be thoroughly reviewed, as Drs. MandaI and Bohman have done in this volume. The involvement of the renal medulla in hypertension was first strongly indicated by the studies of Eric Muirhead. Studying renoprival hyperten­ sion, he demonstrated that the injection of extracts of renal medulla could prevent this type of hypertension in the dog, rabbit, and rat. Subsequently, a number of experiments showed that implants of renal medulla could not only prevent renoprival hypertension but also greatly reduce the level of blood pressure in Goldblatt hypertension in the rat and rabbit. It was later noted that the majority of the surviving cells in these medullary implants were interstitial cells. Pitcock and Muirhead were able to culture these interstitial cells, and implants of the cultured cells lowered blood pressure in renoprival hypertension and Goldblatt hypertension, particularly in the rat. We were able to confirm these general observations by employing implants of medulla in "postsalt" hypertension. The medullary implants did indeed bring the blood pressure down.