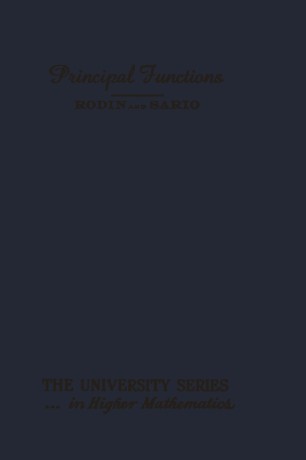 During the decade and a half that has elapsed since the intro­ duction of principal functions (Sario [8 J), they have become impor­ tant tools in an increasing number of branches of modern mathe­ matics. The purpose of the present research monograph is to systematically develop the theory of these functions and their ap­ plications on Riemann surfaces and Riemannian spaces. Apart from brief background information (see below), nothing contained in this monograph has previously appeared in any other book. The basic idea of principal functions is simple: Given a Riemann surface or a Riemannian space R, a neighborhood A of its ideal boundary, and a harmonic function s on A, the principal function problem consists in constructing a harmonic function p on all of R which imitates the behavior of s in A. Here A need not be connected, but may include neighborhoods of isolated points deleted from R. Thus we are dealing with the general problem of constructing harmonic functions with given singularities and a prescribed behavior near the ideal boundary. The function p is called the principal function corresponding to the given A, s, and the mode of imitation of s by p. The significance of principal functions is in their versatility.