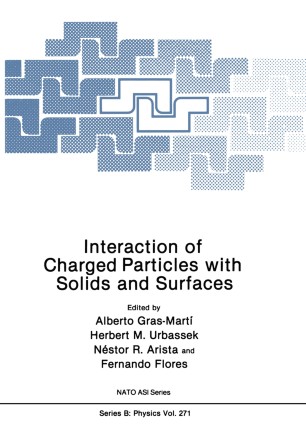 Interaction of Charged Particles with Solids and Surfaces

Early in 1989, while most of us were gathered in the Mediterranean five-centuries-old city of Alacant, the idea of a school on stopping and particle penetration phenomena came to our minds. Later that year when discussing this plan with some of the participants in the 13th International Conference on Atomic Collisions in Solids in Aarhus, we were pleased to note that the proposal was warmly welcomed indeed by the community. An Advanced Study Institute on this or a related subject had not been organized in the last decade. Because of the progress made particularly in the interaction of high energy beams with matter, and the many applications which the general subject of the stopping of charged particles (ions and electrons) in matter enjoys, a Study Institute appeared a worthy enterprise. Even though several international conference series cover developments in these areas, they miss tutorial introductions to the field. The title chosen was Interaction of Charged Particles with Solids and Surfaces, and the objectives were stated as follows: "to cover theory and experiments, including selected applications and hot topics, of the stopping of charged particles (ions and electrons) in matter. The emphasis will be on outlining the areas where further effort is needed, and on specifying the basic needs in applications. Fundamental concepts will prevail over applications, and the character of the Institute as a school will be stressed. " The school was directed by Fernando Flores (Spain), Herbert M. Urbassek (Germany), Nestor R.