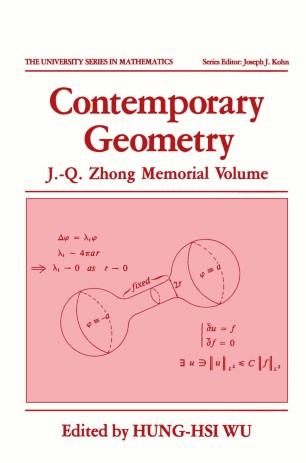 Part of the The University Series in Mathematics book series (USMA)

Early one morning in April of 1987, the Chinese mathematician J. -Q. Zhong died unexpectedly of a heart attack in New York. He was then near the end of a one-year visit in the United States. When news of his death reached his Chinese-American friends, it was immediately decided by one and all that something should be done to preserve his memory. The present volume is an outgrowth of this sentiment. His friends in China have also established a Zhong Jia-Qing Memorial Fund, which has since twice awarded the Zhong Jia-Qing prizes for Chinese mathematics graduate students. It is hoped that at least part of the reasons for the esteem and affection in which he was held by all who knew him would come through in the succeeding pages of this volume. The three survey chapters by Li and Treibergs, Lu, and Siu (Chapters 1-3) all center around the areas of mathematics in which Zhong made noteworthy contributions. In addition to putting Zhong's mathematical contributions in perspective, these articles should be useful also to a large segment of the mathematical community; together they give a coherent picture of a sizable portion of contemporary geometry. The survey of Lu differs from the other two in that it gives a firsthand account of the work done in the People's Republic of China in several complex variables in the last four decades.