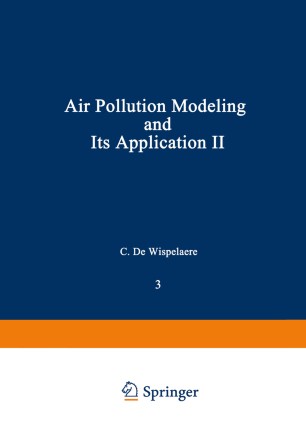 In 1969 the North Atlantic Treaty Organization established the Committee on the Challenges of Hodern Society. Air Pollution was from the start one of the priority problems under study within the framework of the pilot studies undertaken by this Committee. The organization of a yearly symposium dealing with air pollution modeling and its application is one of the main activities within the pilot study in relation to air pollution. After being organized for five years by the United States and for five years by the Federal Republic of Germany, Belgium, repre­ sented by the Prime Minister's Office for Science Policy Programming, became responsible in 1980 for the organization of this symposium. This volume contains the papers presented at the 12th Interna­ tional Technical Meeting on Air Pollution Modeling and its Appli­ cation held at SRI International, Menlo Park, California in the USA from 25th to 28th August 1981. The meeting was jointly organized by the Prime Minister's Office for Science Policy Programming, Belgium and SRI International, USA. The conference was attended by 109 participants and 51 papers have been presented. The members of the selection committee of the 12th I.T.M. were A. Berger (Chair­ man, Belgium), W. Klug (Federal Republic of Germany), L.E. Niemeyer (United States of America), L. Santomauro (Italy), J. Tikvart (United States of America), M.L. Williams (United Kingdom), H. Van Dop (The Netherlands), C. De Wispelaere (Coordinator, Belgium).