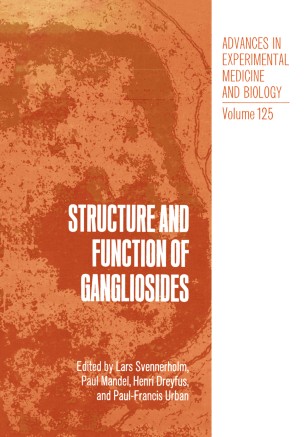 Structure and Function of Gangliosides

Part of the Advances in Experimental Medicine and Biology book series (AEMB, volume 125)

This volume records the proceedings of an International Symposium on The Structure and Function of Gangliosides, held at Le Bischenberg, Alsace, France, in April 23-27, 1979. The meeting was convened to get a comprehensive view of the immense activity that had occurred in the field since the previous conference on gangliosides held at Mont Sainte-Odile, ~lsace, France, in April 1973. At a conference on Enzymes of Lipid Metabolism held at the same place in April, 1977, several of the participants from the first ganglioside conference in 1973 met again. All previous participants agreed that the first meeting with its many frank and stimulating lectures, round tables and informal discussions had been of tremendous importance for the activity in the field and led to many personal contacts and a warm friendship among the ganglioside researchers. The success of the first meeting must be ascribed largely to one single man, PAUL MANDEL. Therefore, we decided to dedicate the next ganglioside conference to hirn and I was given the privilege to arrange the meeting together with him and staff members at Centre de Neurochirnie, Strasbourg. The Symposium on The Structure and Function of Gangliosides was arranged to honour PAUL MANDEL for his unique and never­ failing efforts to promote and strengthen international col­ laboration in all fields of neurochemistry.