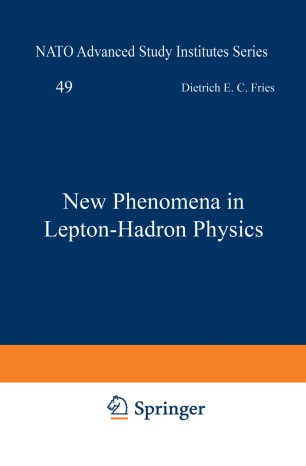 The NATO Advanced Summer Institute 1978 was held at Karlsruhe from Sept. 4 to Sept. 16. The title of the school "New Phenomena in Lepton and Hadron Physics" relates to the present very exciting phase in particle physics. An impressive amount of experimental data has been collected in support of a fundamental new picture of the subnuclear world, - a picture which has found its theoretical formulation in Que~tum Chromodynamics and Gau~ theories. It is a general philosophy of the ASI to address the courses mainly to young and learning scientists, hence our major objective was to offer systematic reviews of both, the experimental situa­ tion and the basic theoretical concepts of the field. This volume contains the written versions of the major lectures delivered during the course. In addition several lectures and seminars had been scheduled in which also more original and specialized subjects were discus­ sed by invited speakers and participants of the school. Not all of these contributions are contained in this book.