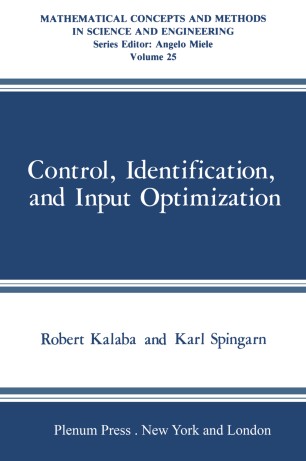 This book is a self-contained text devoted to the numerical determination of optimal inputs for system identification. It presents the current state of optimal inputs with extensive background material on optimization and system identification. The field of optimal inputs has been an area of considerable research recently with important advances by R. Mehra, G. c. Goodwin, M. Aoki, and N. E. Nahi, to name just a few eminent in­ vestigators. The authors' interest in optimal inputs first developed when F. E. Yates, an eminent physiologist, expressed the need for optimal or preferred inputs to estimate physiological parameters. The text assumes no previous knowledge of optimal control theory, numerical methods for solving two-point boundary-value problems, or system identification. As such it should be of interest to students as well as researchers in control engineering, computer science, biomedical en­ gineering, operations research, and economics. In addition the sections on beam theory should be of special interest to mechanical and civil en­ gineers and the sections on eigenvalues should be of interest to numerical analysts. The authors have tried to present a balanced viewpoint; however, primary emphasis is on those methods in which they have had first-hand experience. Their work has been influenced by many authors. Special acknowledgment should go to those listed above as well as R. Bellman, A. Miele, G. A. Bekey, and A. P. Sage. The book can be used for a two-semester course in control theory, system identification, and optimal inputs.