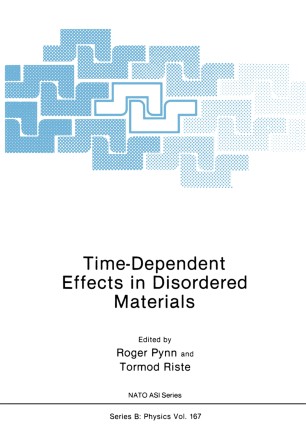 This volume comprised the proceedings of a NATO Advanced Study Institute held in Geilo, Norway between 29 March and 9 April 1987. Al though the principal support for the meeting was provided by the NATO Cornrni ttee for Scientific Affairs, a number of additional sponsors also contributed. Additional funds were received from: Institutt for Energiteknikk (Norway) The Norwegian Research Council for Science and Humanities NORDITA (Denmark) VISTA (Norway) The organizing cornrni ttee would like to take this opportunity to thank all sponsors for their help in promoting an exciting and rewarding meeting. This Study Institute was the ninth of a series of meetings held in Geilo on subjects related to phase transitions and was a natural successor to the 1985 meeting on Scaling Phenomena in Disordered Systems. Many of the subjects discussed at the latter meeting were revisited in 1987, with time dependence as an added feature. Often the common theme was the concept of fractals first introduced into statistical physics some six years ago. However, by no means all disordered systems can be forced into a fractal framework, and many of the lectures reinforced this lesson.