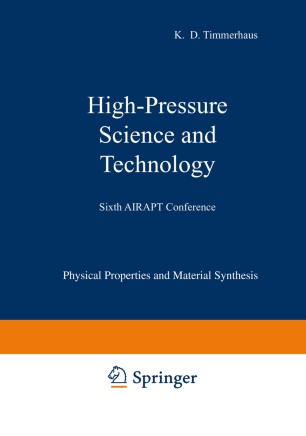 High pressure has become a basic variable in many areas of science and engineering. It extends from disciplines of geophysics and astrophysics through chemistry and physics to those of modern biology, electrical and chemical engineering. This breadth has been recognized for some time, but it was not until the early 1960's that an international group of scientists and engineers established the Association Internationale for Research and Advancement of High Pressure Science and Technology (AIRAPT) for bringing these various aspects of high pressure together at an international conference. The First AIRAPT International High Pressure Conference was held in 1965 in France and has been convened at approximately two to three­ year intervals since that time. The past four AIRAPT International High Pressure Conferences have been held in Germany, Scotland, Japan and the U.S.S.R. Since the first meeting of this kind, our understanding of high pressure behavior of physical systems has increased greatly.