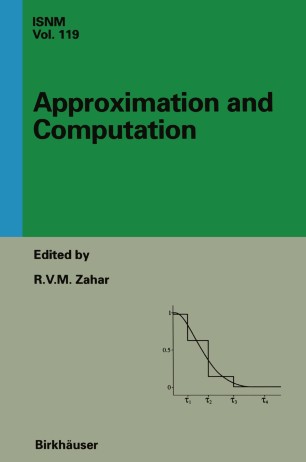 Approximation and Computation: A Festschrift in Honor of Walter Gautschi

Proceedings of the Purdue Conference, December 2–5, 1993

R. V. M. Zahar* The sixty-fifth birthday of Walter Gautschi provided an opportune moment for an international symposium in his honor, to recognize his many contributions to mathematics and computer sciences. Conceived by John Rice and sponsored by Purdue University, the conference took place in West Lafayette from December 2 to 5, 1993, and was organized around the four main themes representing Professor Gautschi's principal research interests: Approximation, Orthogonal Polynomials, Quadrature and Special Functions. Thirty-eight speakers - colleagues, co-authors, research collaborators or doctoral students of Professor Gautschi - were invited to present articles at the conference, their lectures providing an approximately equal representation of the four disciplines. Five invited speakers, Germund Dahlquist, Philip Davis, Luigi Gatteschi, Werner Rheinboldt and Stephan Ruscheweyh, were unable to present their talks because of illness or other commitments, although Professors Dahlquist, Gatteschi and Ruscheweyh subsequently contributed arti­ cles to these proceedings. Thus, the final program contained thirty-three technical lectures, ten of which were plenary sessions. Approximately eighty scientists attended the conference, and for some ses­ sions - in particular, Walter's presentation of his entertaining and informative Reflections and Recollections - that number was complemented by many visitors and friends, as well as the family of the honoree. A surprise visit by Paul Erdos provided one of the highlights of the conference week. The ambiance at the sym­ posium was extremely collegial, due no doubt to the common academic interests and the personal friendships shared by the participants.