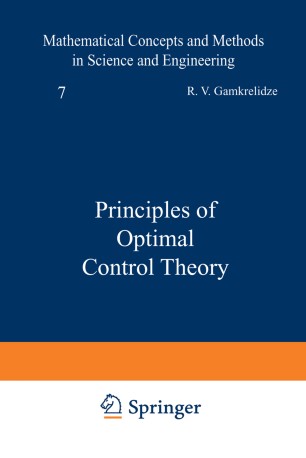 Part of the Mathematical Concepts and Methods in Science and Engineering book series (MCSENG, volume 7)

In the late 1950's, the group of Soviet mathematicians consisting of L. S. Pontryagin, V. G. Boltyanskii, R. V. Gamkrelidze, and E. F. Mishchenko made fundamental contributions to optimal control theory. Much of their work was collected in their monograph, The Mathematical Theory of Optimal Processes. Subsequently, Professor Gamkrelidze made further important contributions to the theory of necessary conditions for problems of optimal control and general optimization problems. In the present monograph, Professor Gamkrelidze presents his current view of the fundamentals of optimal control theory. It is intended for use in a one-semester graduate course or advanced undergraduate course. We are now making these ideas available in English to all those interested in optimal control theory. West Lafayette, Indiana, USA Leonard D. Berkovitz Translation Editor Vll Preface This book is based on lectures I gave at the Tbilisi State University during the fall of 1974. It contains, in essence, the principles of general control theory and proofs of the maximum principle and basic existence theorems of optimal control theory. Although the proofs of the basic theorems presented here are far from being the shortest, I think they are fully justified from the conceptual view­ point. In any case, the notions we introduce and the methods developed have one unquestionable advantage -they are constantly used throughout control theory, and not only for the proofs of the theorems presented in this book.