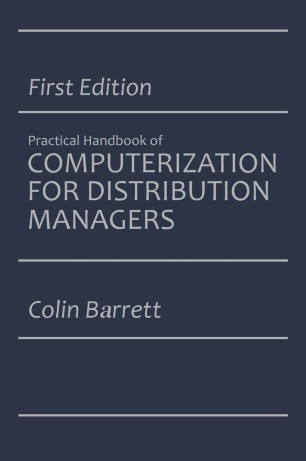 The Practical Handbook of Computerization for Distribution Managers

Back in 1983 I was chatting with Dick Coleman, publisher of Traffic World magazine, when he unexpectedly proposed that I write a column for the magazine on computer applications in the transportation/physical distribution industry. "But, Dick, I don't know all that much about computers," I protested. "You use one, don't you?" he asked logically. Yes, I did; I'd been running my consulting business with it for two years. But that didn't, I explained, make me an expert. "Think about it," he said. That's typical Coleman; he drops these studiedly casual ideas and just lets them lay there until you pick them up and wind up doing just what he wanted you to do all along. Sure enough, the longer I pondered the notion the more it appealed to me. OK, I wasn't a computer expert (I'm still not). But I was a computer user, in the transportation/distribution field; maybe from that perspective I might have some useful things to say to other transportation/distribution users and would-be users of computers. Thus was born the "Computer Software for Transportation" column. The first one appeared in the April 11, 1983, issue of Traffic World, and it's been a once-a-month schedule ever since. And thus, too, was ultimately born this book.