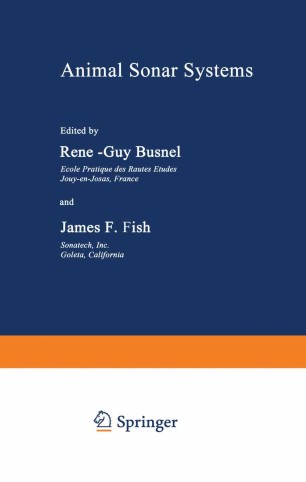 Thirteen years have gone by since the first international meet­ ing on Animal Sonar Systems was held in Frascati, Italy, in 1966. Since that time, almost 900 papers have been published on its theme. The first symposium was vital as it was the starting point for new research lines whose goal was to design and develop technological systems with properties approaching optimal biological systems. There have been highly significant developments since then in all domains related to biological sonar systems and in their appli­ cations to the engineering field. The time had therefore come for a multidisciplinary integration of the information gathered, not only on the evolution of systems used in animal echolocation, but on systems theory, behavior and neurobiology, signal-to-noise ratio, masking, signal processing, and measures observed in certain species against animal sonar systems. Modern electronics technology and systems theory which have been developed only since 1974 now allow designing sophisticated sonar and radar systems applying principles derived from biological systems. At the time of the Frascati meeting, integrated circuits and technol­ ogies exploiting computer science were not well enough developed to yield advantages now possible through use of real-time analysis, leading to, among other things, a definition of target temporal char­ acteristics, as biological sonar systems are able to do. All of these new technical developments necessitate close co­ operation between engineers and biologists within the framework of new experiments which have been designed, particularly in the past five years.