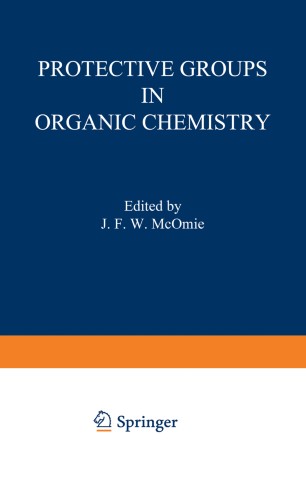 During the past decade there has been a great increase in the use of protective groups, especially in the synthesis of large and complex organic molecules. Perhaps the greatest activity has been in the peptide field where such triumphs as the total synthesis of insulin and of bovine ribonuclease (molecular weight 13,700) have been achieved. Correspondingly, more protective groups have been devised for the protection of amino and imino groups than for any other functional group. There are many reviews and books on the synthesis of pep tides but there has been no general survey of protective groups since my 1 own review in 1963. At that time the five main methods for the removal of protective groups involved acid or base hydroly­ sis, reduction, oxidation, or thermal elimination reactions. Recent advances include the use of photo-sensitive and metal­ ion sensitive protective groups, and the attachment of functional groups to reactive polymers as a method of protec­ tion during the solid-phase synthesis of peptides and poly­ nucleotides. Another interesting development is the design and use of protective groups with a built-in 'safety-catch', which can be 'released' by a specific chemical reaction, so that an otherwise stable bond is made labile at the appropriate moment thereby allowing the protective group to be removed under very 2 mild conditions. My own interest in protective groups dates from 1944 when, as a student, I gave two lectures on the subject and produced an 11 page review including 70 references.