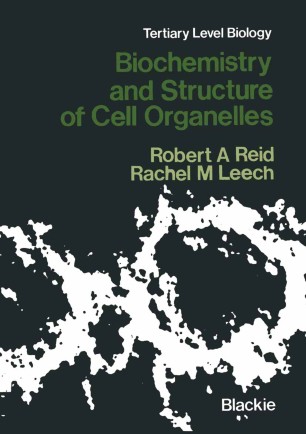 Biochemistry and Structure of Cell Organelles

THIS BOOK HAS BEEN WRITTEN BECAUSE WE FEEL THAT THERE IS A NEED FOR AN up-to-date compact book on cell organelles that transmits the excitement and challenge of modern subcellular biology. We hope that the book will be interesting and useful to students of the biological sciences and medicine, and to those in the teaching professions who do not have ready access to research papers. Since space is at a premium, we have denied ourselves the luxury of a philosophical discussion of the problems of defining organelles. Rather we have chosen to include all those intracellular structures which have limiting membranes and definable compartments. The separate chapters consider nuclei, plastids, mitochondria, microbodies, endoplasmic and sarcoplasmic reticulum; Golgi bodies, lysosomes and various secretory vesicles, including chromaffin granules and synaptic vesicles. Nucleoli, ribosomes, and centrioles are included in the chapter on nuclei. New and exciting informatioIi about all these structures has emerged in recent years-for example; the nUcleosome, interrupted genes, signal sequences on proteins destined. for the bioenergetic organelles, mapping and sequencing of organelle genes, and consolidation of chemiosmosis as a unifying principle in energy transduction. We have outlined as many of these developments as possible and pointed out some areas of controversy. The literature on subcellular biology is so extensive that it would have been easier to have written a separate book on each organelle.