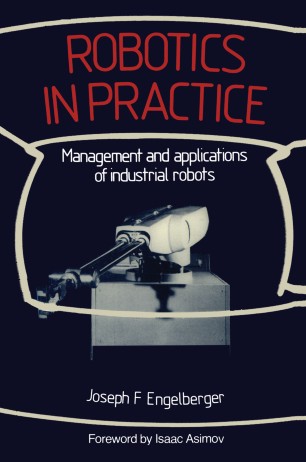 Management and applications of industrial robots

THE REAL THING by Isaac Asimov Back in 1939, when I was still a teenager, I began to write (and publish) a series of stories about robots which, for the first time in science fiction, were pictured as having been deliberately engineered to do their job safely. They were not intended to be creaky Gothic menaces, nor outlets for mawkish sentiment. They were simply well-designed machines. Beginning in 1942, I crystallized this notion in what I called 'The Three Laws of Robotics' and, in 1950, nine of my robot stories were collected into a book, I, Robot. I did not at that time seriously believe that I would live to see robots in action and robotics becoming a booming industry .... Yet here we are, better yet, I am alive to see it. But then, why shouldn't they be with us? Robots fulfil an important role in industry. They do simple and repetitive jobs more steadily, more reliably, and more uncomplainingly than a human being could - or should. Does a robot displace a human being? Certainly, but he does so at a job that, simply because a robot can do it, is beneath the dignity of a human being; a job that is no more than mindless drudgery. Better and more human jobs can be found for human beings - and should.