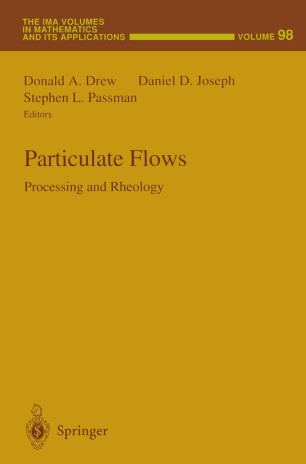 Part of the The IMA Volumes in Mathematics and its Applications book series (IMA, volume 98)

This IMA Volume in Mathematics and its Applications PARTICULATE FLOWS: PROCESSING AND RHEOLOGY is based on the proceedings of a very successful one-week workshop with the same title, which was an integral part of the 1995-1996 IMA program on "Mathematical Methods in Materials Science." We would like to thank Donald A. Drew, Daniel D. Joseph, and Stephen L. Passman for their excellent work as organizers of the meeting. We also take this opportunity to thank the National Science Foun­ dation (NSF), the Army Research Office (ARO) and the Office of Naval Research (ONR), whose financial support made the workshop possible. A vner Friedman Robert Gulliver v PREFACE The workshop on Particulate Flows: Processing and Rheology was held January 8-12, 1996 at the Institute for Mathematics and its Applications on the University of Minnesota Twin Cities campus as part of the 1995- 96 Program on Mathematical Methods in Materials Science. There were about forty participants, and some lively discussions, in spite of the fact that bad weather on the east coast kept some participants from attending, and caused scheduling changes throughout the workshop. Heterogeneous materials can behave strangely, even in simple flow sit­ uations. For example, a mixture of solid particles in a liquid can exhibit behavior that seems solid-like or fluid-like, and attempting to measure the "viscosity" of such a mixture leads to contradictions and "unrepeatable" experiments. Even so, such materials are commonly used in manufacturing and processing.