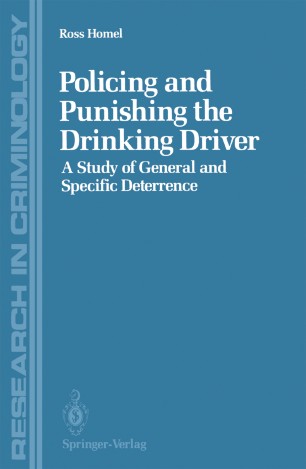 Policing and Punishing the Drinking Driver

A Study of General and Specific Deterrence

Policing and Punishing the Drinking Driver is at one level about the impact of specific drinking-driving countermeasures (punishments imposed by courts on convicted offenders and random breath testing) in a particular place (New South Wales, Australia) in two particular years (1972 and 1983). At another level, however, the research reported herein is concerned with general questions of deterrence, and with the impact of the criminal justice system on the perception and behavior of a broad cross-section of the population. In contrast to much of the research in the drink-drive field, the research questions concentrate on the psychological and sociological processes whereby behavior is altered in the short-term as the result of a massive legal intervention or as the result of the routine imposition of legal punishments.