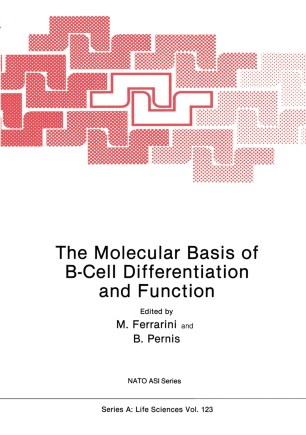 The Molecular Basis of B-Cell Differentiation and Function

The progress in protein and nucleic acid chemistry together with improvements of the previously employed tissue culture techniques have led to the solution of problems such as that of the generation of antibody diversity or of the molecular structure of T and B cell membrane receptor for antigen which had challenged the past generations of immunologists. Thanks to this progress an impressive amount of knowledge has been accumulated on certain cell types that were relatively "mysterious" until recently. The B lymphocyte represents a typical example of such a cell. With these considerations in mind, we have started to organize a NATO summer school on "The molecular basis of B cell differentation and function" that had the specific aim of bringing up to date a selected number of young investigators. During the course, held in Santa Margheri ta Ligure, October 1-11, 1985 it became apparent that rather than a formal school we had organized an informal series of Workshops where both the Faculty members and the participants were discussing their own data in addition to reviewing the general progress in the field. The deep commi ttment of everyone to his research subj ect and the enthusiasm had caused this very successful change in the shape of the course. At the end we asked the members of the Faculty and the participants to write a summary of their data and of their point of view on selected subj ect s.