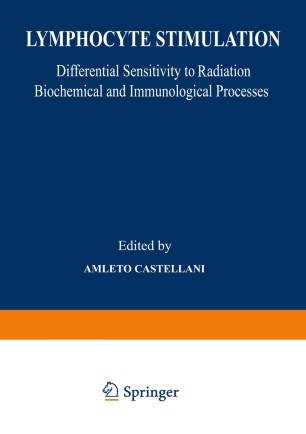 This book is a collection of some of the papers presented at the EMBO Lecture Course on "Lymphocyte stimulation: differential sensitivity to radiation; biochemical and immunological properties." The Course was organized with the aim of fostering interactions between photoradiobiologists and immunologists interested in the problem of DNA damage and repair studied at the lymphocyte level. The papers presented in this book are mainly centered on the problem of radiation sensitivity of lymphocytes in relation to DNA repair phenomena. The radiation biology of human lymphocytes is dominated by two phenomena: (a) high radiosensitivity of lymphocytes which die in interphase (b) PHA-induced relative radioresistance of those cells which, after stimulation, escape the interphase death and eventually die in mitosis. These phenomena constitute a good system to study some of the factors which control the response of human cells to irradiation. In addition it is possible to correlate the development of the relative radioresistance in PHA-stimulated lymphocytes with the biochemical changes connected with the transformation processes. The papers presented in this book constitute a real contribution to the scientific knowledge in this field of research and suggest that lymphocytes could be a very interesting test material useful for measuring the DNA repair capability of human cells to furnish an indication of individual radiosensitivity in man.