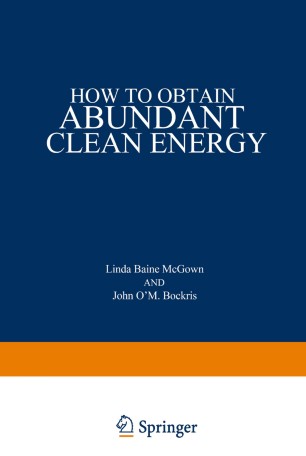 How to Obtain Abundant Clean Energy

The Three Mile Island accident, the periodic occurrence of long gas lines until sufficient price increases are achieved, our dependence on foreign powers for a large fraction of our energy supply, and continual controversy in our government and concerned public groups all point to the real pre­ sence of an energy crisis. Even the government has finally publicly acknow­ ledged the fact that our present fuel sources will run out soon enough to be of concern to us now. This knowledge should raise many questions in the minds of our citizens. When will our sources run out, or at least become too expensive to afford? What could replace them, and which alternatives are best? When we hear about these matters in the news media, we get many contradictory opinions, mainly concerning coal and nuclear energy. Most of us realize that the reintroduction of coal on a massive scale would give rise to considerable pollution difficulties. Many people are also waking to an awareness of the dangers of nuclear reactors. When we turn to scientists for answers, we find that each one seems to advise us that a single path to new energy sources is the best-of course, each scientist tends to advise his own path.