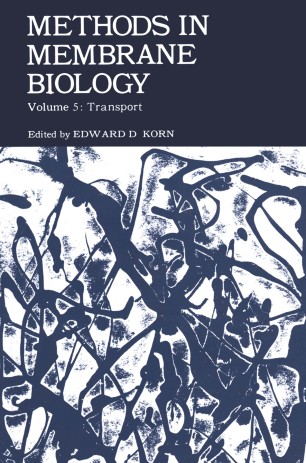 One property common to all cells is transport. Molecules and ions must enter and leave cells by crossing membranes in a controlled manner. The process may take any of several forms: simple diffusion, carrier-mediated diffusion, active transport, or group translocation. There is more than one way to measure each. Transport kinetics, with particular reference to the red blood cell, were discussed in a previous volume. Three chapters deal with the general subject of transport in this volume. Maloney, Kashket, and Wilson summarize the appropriate methodology for studying metabolite and ion transport in bacteria, and Kimmich describes the relevant method­ ology for the isolated intestinal epithelial cell. The methods described in these two chapters have general application to transport studies in single cells from any source. The approach described in these two complementary articles is extended in the chapter by Hochstadt and her collaborators on the use of isolated membranes from bacterial and mammalian cells for the study of trans­ port phenomena. If one can prepare a suitable plasma membrane fraction (sealed, impermeable vesicles with the necessary transport components intact), it becomes possible to separate the events of transport from any subsequent metabolism that may occur in the cell. Isolated membrane vesicles are relatively easy to obtain from bacteria, and they are com­ paratively well studied. Work with similar preparations from cultured mammalian cells is just beginning but has much promise.