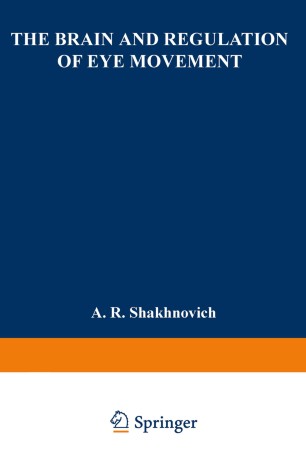 The Brain and Regulation of Eye Movement

Dr. Shakhnovich brought out the original Russian edition of this work in 1974. Fully half of that book was concerned with his own studies of eye movements. These included observations on patients with neuromuscular disorders that produced unique oculomotor deficits. Other anomalies of eye motility resulted from local changes in cerebral and cerebellar blood flow and the effects of surgical intervention for aneurisms and brain tumors. Supplementary experi­ ments included the probing of single units in the motor and visual brain areas of rabbits. Still other studies were done on normal human eye movements with the aid of the Yarbus "cap" attachment to the cornea of the eye. A major aim of the original book was to show that eye movements provide a relatively simple illustration of "goal-directed behavior." This traditional Russian theme, developed by Sechenov, Pavlov, and Bemshtein, was put forth as a unifying concept to explain the author's findings. Consideration was also given to Western ideas ana problems that dominated the research of the 1950's and 1960's. Among these, as summarized by Dr. Shakhnovich, were perceptual constancy, corollary discharge, saccadic suppression, and the effects of image stabilization.