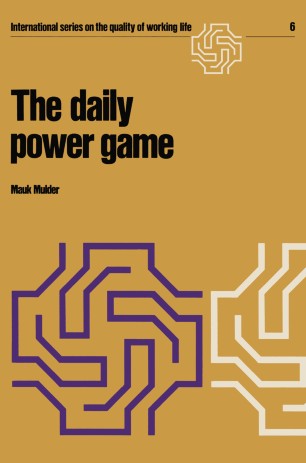 Part of the International series on the quality of working life book series (IQWL, volume 6)

Politicians, social scientists, entrepreneurs, trade unionists, church leaders, philosophers, all of us in fact have caused such vast vague­ ness and confusion about the term 'power' that this can hardly be attributed to mere chance. Apparently, there is so much at stake, whenever we think about power or are involved, that it may be worth our while to keep the concept blurred. This is most clearly seen in social science. Power, inequality in power, struggle for power are a kind of prime movers in social life, but power problems have seldom been studied, compared to the research done on other subjects, such as satisfaction about personal achievement, perception, mental processes, achievement motivation, cultural differences, etc. Power appears to be under a taboo in society and most social scientists agree not to discuss it (ref. 23, pp. 55 and 56). Whatever research there has been reveals the peculiar trend of restricting itself to the study of power differences and power struggles as world- or macro-problems. Studies of mondial problems have covered rela­ tions between America and the Soviet Union, or between rich and poor countries. China has also been included of late. The studies on macrostructural problems will cover subjects like the power of particular groups within the nation, such as retired army generals and politicians working in various sectors of trade and industry (ref. 21, pp. 11 and 281), or the number of representatives of large banks on the advisory boards of other companies (ref. 22).