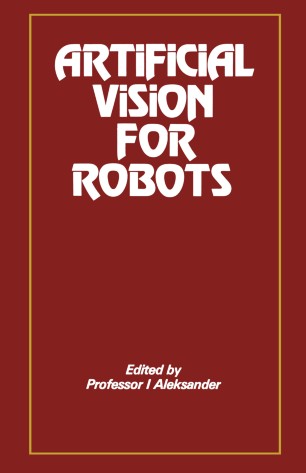 I. ALEKSANDER Department of Electrical Engineering and Electronics BruneI University, England The three key words that appear in the title of this book need some clarification. First, how far does the word robot reach in the context of indus­ trial automation? There is an argument maintaining that this range is not fixed, but increases with advancing technology. The most limited definition of the robot is also the earliest. The history is worth following because it provides a convincing backdrop to the central point of this book: vision is likely to epitomize the technolo­ gical advance, having the greatest effect in enlarging the definition and range of activity of robots. In the mid 1950s it was foreseen that a purely mechanical arm-like device could be used to move objects between two fixed locations. This was seen to be cost-effective only if the task was to remain fixed for some time. The need to change tasks and therefore the level of programmability of the robot was a key issue in the broadening of robot activities. Robots installed in industry in the early 1960s derived their programmability from a device called apinboard. Ver­ tical wires were energized sequentially in time, while horizontal wires, when energized, would trigger off elementary actions in the manipulator arm. The task of reprogramming was a huge one, as pins had to be reinserted in the board, connecting steps in time with robot actions.