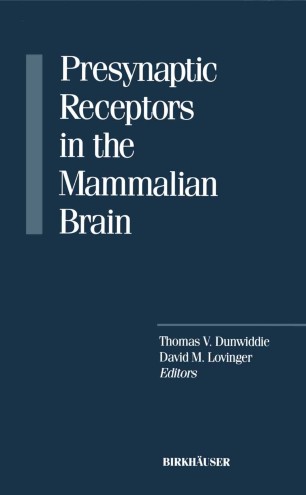 Presynaptic Receptors in the Mammalian Brain

Trying to address the entire field of presynaptic modulation of neurotransmitter release is a rather daunting undertaking, one that is well beyond the scope of this book. In addition, studies of release modulation, particularly from a biochemical standpoint, have been the subjects of several extensive reviews, meetings, and books (Langer, 1978; Chesselet, 1984; Wessler, 1989; Kalsner and Westfall, 1990), which provide an essential introduction to this subject. What we have focused on, however, are several specific aspects of release modulation that perhaps have not been as extensively discussed. First, we felt that it was important to focus on modulation in the central nervous system; much of the work that has been done in the past has emphasized the peripheral nervous system (e. g. , the autonomic nervous system and the neuromuscular junction), in part because such preparations are more amenable to study. However, it is becoming clear that modulation of release is, if anything, more important in the central nervous system than in the periphery, and that virtually every transmitter system that has been studied shows some type of release modulation. The other way in which we have restricted the scope of this volume has been to try to emphasize studies in which functional (primarily electrophysiological) measures of transmitter release have been used rather than direct biochemical measures of release, and to explore the ways in which release modulation affects the normal physiological function at synapses.