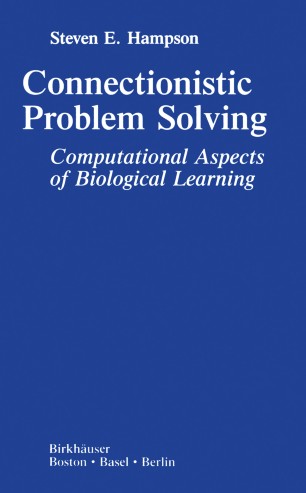 1. 1 The problem and the approach The model developed here, which is actually more a collection of com­ ponents than a single monolithic structure, traces a path from relatively low-level neural/connectionistic structures and processes to relatively high-level animal/artificial intelligence behaviors. Incremental extension of this initial path permits increasingly sophisticated representation and processing strategies, and consequently increasingly sophisticated behavior. The initial chapters develop the basic components of the sys­ tem at the node and network level, with the general goal of efficient category learning and representation. The later chapters are more con­ cerned with the problems of assembling sequences of actions in order to achieve a given goal state. The model is referred to as connectionistic rather than neural, be­ cause, while the basic components are neuron-like, there is only limited commitment to physiological realism. Consequently the neuron-like ele­ ments are referred to as "nodes" rather than "neurons". The model is directed more at the behavioral level, and at that level, numerous con­ cepts from animal learning theory are directly applicable to connectionis­ tic modeling. An attempt to actually implement these behavioral theories in a computer simulation can be quite informative, as most are only partially specified, and the gaps may be apparent only when actual­ ly building a functioning system. In addition, a computer implementa­ tion provides an improved capability to explore the strengths and limita­ tions of the different approaches as well as their various interactions.