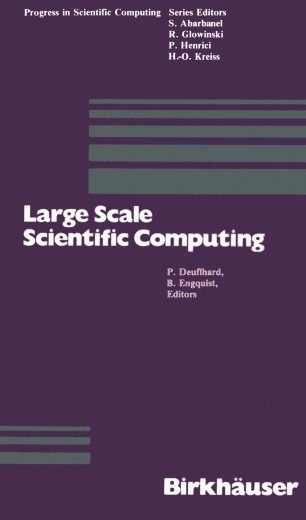 In this book, the new and rapidly expanding field of scientific computing is understood in a double sense: as computing for scientific and engineering problems and as the science of doing such computations. Thus scientific computing touches at one side mathematical modelling (in the various fields of applications) and at the other side computer science. As soon as the mathematical models de­ scribe the features of real life processes in sufficient detail, the associated computations tend to be large scale. As a consequence, interest more and more focusses on such numerical methods that can be expected to cope with large scale computational problems. Moreover, given the algorithms which are known to be efficient on a tradi tional computer, the question of implementation on modern supercomputers may get crucial. The present book is the proceedings of a meeting on "Large Scale Scientific Computing" , that was held a t the Oberwolfach Mathematical Institute (July 14-19, 1985) under the auspices of the Sonderforschungsbereich 123 of the University of Heidelberg. Participants included applied scientists with computational interests, numerical analysts, and experts on modern parallel computers. 'l'he purpose of the meeting was to establish a common under­ standing of recent issues in scientific computing, especially in view of large scale problems. Fields of applications, which have been covered, included semi-conductor design, chemical combustion, flow through porous media, climatology, seismology, fluid dynami. cs, tomography, rheology, hydro power plant optimization, subwil. y control, space technology.