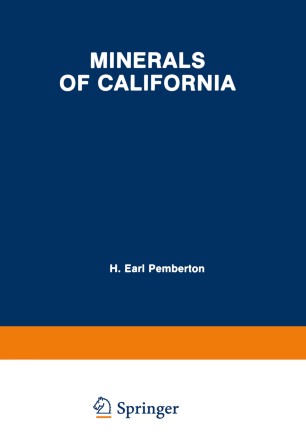 In 1866 William P. Blake, professor of mineralogy, geology and mining at the College of California, parent to the University of California, Berkeley, prepared as a report to the State Board of Agriculture an "Annotated Catalog of the Principal Mineral Species Hitherto Recognized in California and the adjoining States and Territories. " Seventy-seven mineral species appeared on the list. It was the beginning of a series that became known as Minerals of California. This first catalog was followed in 1884 and 1886 by a list of 135 species compiled by H. G. Hanks, the first state mineralogist of California, and pub· lished in the fourth and sixth State Mining Bureau reports. Then beginning in 1914 with a volume prepared by A. S. Eakle, professor of mineralogy at the Uni­ versity of California, Berkeley, the Division of Mines and Geology published new editions in the series at approximately ten-year intervals. Author Year Mineral Species A. S. Eakle 1914 352 A. S. Eakle 1923 417 A. Pabst 1938 446 J. Murdoch and R. W. Webb 1948 516 J. Murdoch and R. W. Webb 1956 523 J. Murdoch and R. W. Webb 1966 602 (For a more detailed review of the Minerals of California series, see I. Campbell, 1966, pp. 13-19. ) For over 100 years the series has served those who have a historic, scientific or economic interest in California minerals.