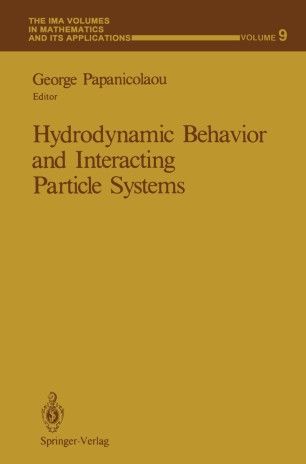 Part of the The IMA Volumes in Mathematics and Its Applications book series (IMA, volume 9)

This IMA Volume in Mathematics and its Applications HYDRODYNAMIC BEHAVIOR AND INTERACTING PARTICLE SYSTEMS is in part the proceedings of a workshop which was an integral part of the 1985-86 IMA program on STOCHASTIC DIFFERENTIAL EQUATIONS AND THEIR APPLICATIONS. We are grateful to the Scientific Committee: Daniel Stroock (Chairman) Wendell Fleming Theodore Harris Pierre-Louis Lions Steven Orey George Papanicolaou for planning and implementing an exciting and stimulating year-long program. We especially thank the Program Organizer, George Papanicolaou for orga­ nizing a workshop which brought together scientists and mathematicians in a variety of areas for a fruitful exchange of ideas. George R. Sell Hans Weinberger PREFACE A workshop on the hydrodynamic behavior of interacting particle systems was held at the Institute for Mathematics and its Applications at the University of Minnesota during the week of March 17, 1986. Fifteen papers presented at the workshop are collected in this volume. They contain research in several different directions that are currently being pursued. The paper of Chaikin, Dozier and Lindsay is concerned with experimental results on suspensions in regimes where modern mathematical methods could be useful. The paper of Fritz gives an introduction to these methods as does the paper of Spohn. Analytical methods currently used by in the physics and chemistry literature are presented in the paper of Freed, Wang and Douglas. The paper of Caflisch deals with time dependent effects in sedimentation.