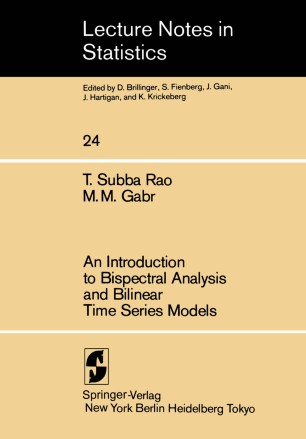 An Introduction to Bispectral Analysis and Bilinear Time Series Models

The theory of time series models has been well developed over the last thirt,y years. Both the frequenc.y domain and time domain approaches have been widely used in the analysis of linear time series models. However. many physical phenomena cannot be adequately represented by linear models; hence the necessity of nonlinear models and higher order spectra. Recently a number of nonlinear models have been proposed. In this monograph we restrict attention to one particular nonlinear model. known as the "bilinear model". The most interesting feature of such a model is that its second order covariance analysis is ve~ similar to that for a linear model. This demonstrates the importance of higher order covariance analysis for nonlinear models. For bilinear models it is also possible to obtain analytic expressions for covariances. spectra. etc. which are often difficult to obtain for other proposed nonlinear models. Estimation of bispectrum and its use in the construction of tests for linearit,y and symmetry are also discussed. All the methods are illustrated with simulated and real data. The first author would like to acknowledge the benefit he received in the preparation of this monograph from delivering a series of lectures on the topic of bilinear models at the University of Bielefeld. Ecole Normale Superieure. University of Paris (South) and the Mathematisch Cen trum. Ams terdam.