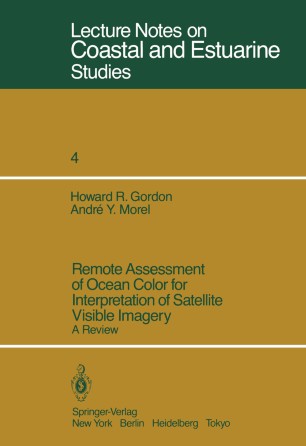 Since the pioneering work of Clarke et a1. (1970) it has been known that chlorophyll a (or. more generally. pigments) contained in phytoplankton in near-surface waters produced systematic variations in the color of the ocean which could be observed from aircraft. As a direct result of this work. NASA developed the Coastal Zone Color Scanner (CZCS). which was launched on Nimbus-G (now Nimbus-7) in October 1978. (A short description of the CZCS is provided in Appendix I. ) Shortly before launch. at the IUCRM Colloquium on Passive Radiometry of the Ocean (June 1978). a working group on water color measurements was formed to assess water color remote sensing at that time. A report (Morel and Gordon. 1980) was prepared which summarized the state-of-the-art of the algorithms for atmospheric correction. and phytoplankton pigment and seston retrieval. and which included recommendations concerning the design of next generation sensors. The water color session of the COSPAR/SCOR/IUCRM Symposium 'Oceanography from Space' held in Venice (May 1980. i. e •• in the post-launch period) provided the opportunity for a reassessment of the state-of-the-art after having gained some experience in the analysis of the initial CZCS imagery. Such an assessment is the purpose of this review paper. which will begin with an outline of the basic physics of water color remote sensing and the fundamentals of atmospheric corrections. The present state of the constituent retrieval and atmospheric correction algorithms will then be critically assessed.