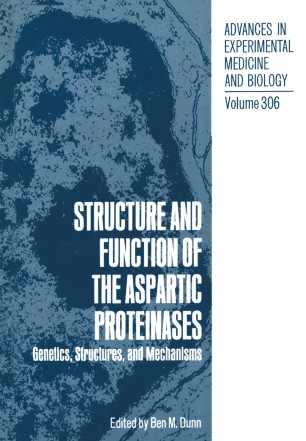 Structure and Function of the Aspartic Proteinases

Part of the Advances in Experimental Medicine and Biology book series (AEMB, volume 306)

In September, 1990, a group of 160 scientists from 19 countries and 21 of the United States met at the Red Lion Inn in Rohnert Park, Sonoma County, California. The purpose of this meeting was to share new information from recent research on the Aspartic Proteinases. This book is a compilation of the information transferred in that forum. The Aspartic Proteinases include all those enzymes from the "fourth" class of proteolytic enzymes, the first three being the Serine, Cysteine and Metalloproteinases. Of course, all the scientists in attendance at the Sonoma Aspartic Proteinase Conference would agree that our current level of understanding of the structure and function of the Aspartic Proteinase class of enzymes is clearly first class. The reasons for this require a bit of historical perspective. The group of scientists who are engaged in study of this family of enzymes first met as a separate entity in 1976, in Norman, Oklahoma, at a meeting organized by Jordan Tang of the Oklahoma Medical Research Foundation. This was an exciting time, as the first crystal structures of some of these enzymes were described by Blundell, James and Davies. During that conference, the relationship between the two halves of the mammalian and fungal enzymes was recognized and this has provided a structural foundation for analysis of the retroviral enzymes, which came later. A book was published by Plenum Press documenting l this conference, and the current book is an update to that important work.