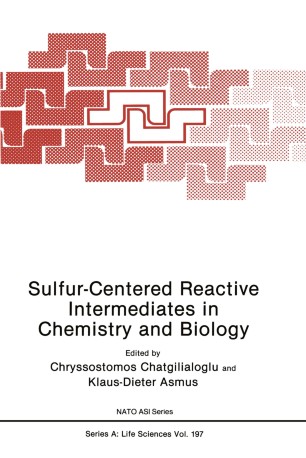 A wonderfully successful NATO Advanced Study Institute on "Sulfur-Centered Reactive Intermediates in Chemistry and Biology" was held 18-30 June, 1989, at the Hotel Villa del Mare in Maratea, Italy. Despite the beautiful setting with mountains behind us and over­ looking the clear blue Mediterranean Sea under a cloudless sky (and with a private beach available), the lectures were extremely well attended. While some credit can go to the seriousness of the students, more must go to the calibre of speakers and the high quality of C. Chatgilialoglu, and Co-Director, Professor K. -D. their presentations. The Director, Dr. Asmus, are to be congratulated for putting together such an outstanding scientific program. Dr. Chatgilialoglu is also to be commended for arranging an equally stimulating social pro­ gram which included bus, train and boat trips to many local sites of interest. It was particularly fitting that a meeting on the chemistry and biochemistry of sulfur should be held in Italy since Italian chemists have made major contributions to our under­ standing of the organic chemistry of sulfur, including the chemistry of its reactive inter­ mediates. The early Italian interest in sulfur chemistry arose from the fact that Italy, or more specifically, Sicily, was a major world producer of sulfur prior to the development and exploitation of the Frasch process in Texas and Louisiana.