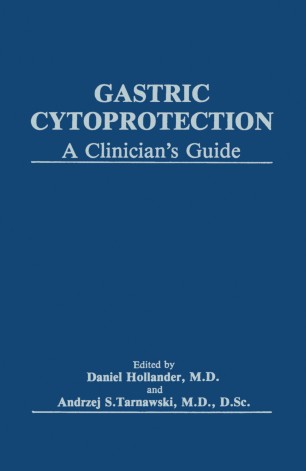 Gastric secretions contain hydrogen ions at a concentration that is more than one million times higher than their intracellular concentration. This phenomenal gradient as well as the demonstrated ability of gastric juice to digest tissues has motivated clinicians and investigators alike to emphasize acid secretion and acid ablation in studying the pathogenesis and therapy of peptic ulcer disease. Conse­ quently, over the past 150 years, we have made considerable progress in under­ standing the mechanisms and regulation of acid secretion by the stomach. Not surprisingly, therapy for both peptic disease and mucosal injury has also been predominantly directed at either neutralizing acid or suppressing its production. During the past 10 years, attention has been focused on factors other than acid in the genesis and therapy of ulcer disease. Work done worldwide demon­ strated that acid hypersecretion is not a common event in peptic ulcer disease. Therefore, we began realizing that factors other than acid secretion may be important in the genesis of ulcer disease or in gastroduodenal mucosal damage. In addition, new physiological information has established that the gas­ troduodenal mucosa is normally protected by a complex series of events includ­ ing mucus and bicarbonate secretion, cell renewal, surface mucosal restitution, and preservation of the microvasculature and mucosal proliferative zone.