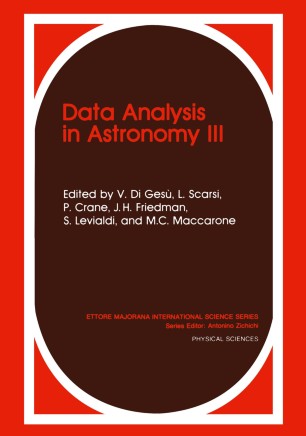 In the book are reported the main results presented at the Third International Workshop on Data Analysis in Astronomy, held at the EUore Majorana Center for Scientific Culture, Erice, Sicily, Italy, on June 20-27,1988. The Workshop was the natural evolution of the two previous ones. The main goal of the first edition (Erice 1984) was to start a scientific interaction between Astronomers and Computer Scientists. Aim of the second (Erice 1986) was to look at the progress in data analysis methods and dedicated hardware technology. Data analysis problems become harder whenever the data are poor in statistics or the signal is weak and embedded in structured background. Experiments collecting data of such a nature require new and non-standard methodologies. Possibilistic approaches could be merged with the statistical ones, in order to formalize all the knowledge used by the scientists to reach conclusions. Moreover, the last decade has been characterized by very fast developments of Intelligent Systems for data analysis (knowledge based systems, ... ) that would be useful to support astronomers in complex decision making. For these reasons, the last edition of the workshop was intended to provide an overview on the state of the art in the data analysis methodologies and tools in the new frontieres of the astrophysics (y-astronomy, neutrino astronomy, gravitational waves, background radiation and extreme cosmic ray energy spectrum). The book is organized in two sections: - Data analysis methods and tools, - New frontieres in astronomy.