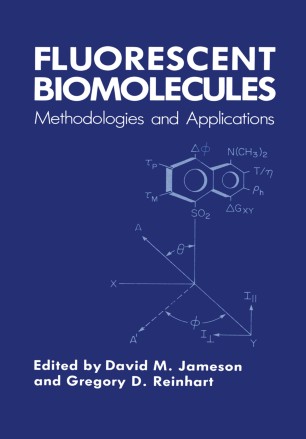 This volume is based on an international symposium held during September 9-12, 1986 in Bocca di Magra, Italy. The intent of the organizers was to bring together expert practitioners of fluorescence spectroscopy, particularly as applied to biological systems, to assess recent developments in the field and discuss future directions. At the same time the meeting was intended to honor the singular and outstanding scientific career of Gregorio Weber on the occasion of his seventieth birthday. Gregorio Weber is truly the pioneer in the application of fluores­ cence methods to biochemistry and biophysics. A complete list of his scientific contributions to fluorescence and to protein biochemistry is beyond the scope of this preface. Suffice it to say that since his initial landmark articles on fluorescence, published in the late 1940's and early 1950's, Gregorio Weber has continued to make seminal contribu­ tions to both the theory and practice of fluorescence and, contrary to many who might be tempted to rest on their laurels, he shows no signs of slackening his pace. In addition to his more obvious tangible contributions to the scientific field, Gregorio Weber has made equally valuable contributions of another type. Specifically, he has had the most profound impact, both profeSSionally and personally, on generations of young scientists.