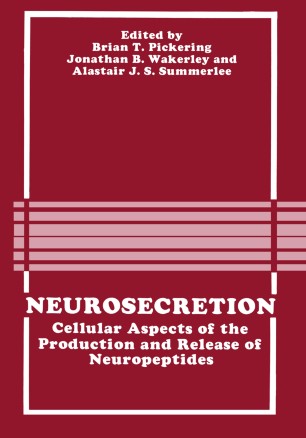 Cellular Aspects of the Production and Release of Neuropeptides

This volume collects together the Proceedings of the Tenth International Symposium on Neurosecretion which was held in Bristol in September 1987. This series of symposia began with a meeting in Naples in 1953 and it was particularly gratifying to welcome two members of that original gathering, Berta Scharrer and Ellen Thomsen, to the 10th Symposium. The acceptance of the invitation to meet in Bristol gave particular pleasure to the Local Organising Committee because it was the first time that a former venue was revisited - the 3rd Symposium was organised in Bristol by Hans Heller in 1961 and we were very glad that his widow, Josephine, was able to be the Guest-of-Honour at the banquet of our 10th symposium. Neurosecretion has diversified considerably since the first meeting in 1953. From the outset, the local committee decided to focus the meeting by organising it under the title "Cellular aspects of the production and release of neuropeptides. " Having sought advice from the International Committee for Symposia on Neurosecretion, we invited 28 scientists from throughout the world to present their work on aspects ranging from the organisation of the gene through to the electrical properties of peptide-secreting neurones. The progress of studies in neurosecretion owes much to the comparative approach and we attempted to reflect this in the programme of the tenth symposium by inviting the speakers, to illustrate the various aspects of neuropeptide secretion, from among scientists working with systems in many parts of the animal kingdom.