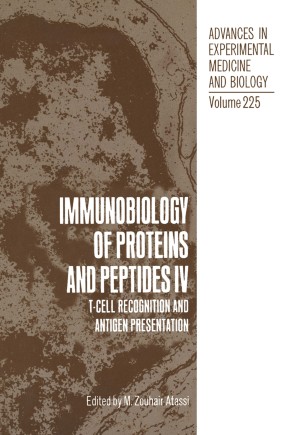 Immunobiology of Proteins and Peptides IV

Part of the Advances in Experimental Medicine and Biology book series (AEMB, volume 225)

This symposium was established in 1976 for the purpose of bringing to­ gether once every two or three years, active investigators in the fore­ front of contemporary immunology, to present their findings and to discuss their significance in the light of current concepts and to identify important new directions of investigation. The founding of the symposium was stimulated by the achievement of major breakthroughs in the under­ standing of the immune recognition of proteins and peptides. We believed that these breakthroughs will lead to the creation of a new generation of peptides which should have enormous potential in biological, therapeutic and basic applications. This anticipated explosion has finally occurred and many applications of these peptides are now being realized. The main symposia topics of the fourth symposium were: T-cell recognition of proteins, structure and function of the T-cell receptor, presentation of protein antigens, recycling and activation of membrane receptor molecules, Ir-gene control of T-cell responses and methods of cell separation. The molecular features recognized by antibodies on proteins were the first immune recognition sites to be local ized and confirmed by synthetic peptides. The complete antigenic structures of several proteins have been defined, and individual antigenic sites have been described on many more proteins. More recently, major breakthroughs have been reported in the immune recognition of proteins by T cells.