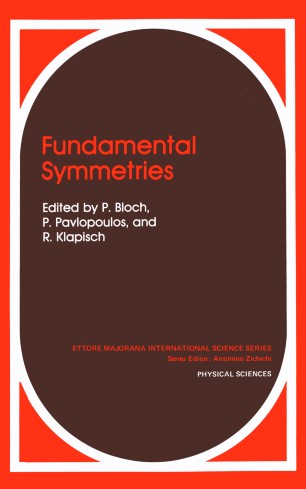 The first course of the International School on Physics with Low Energy Antiprotons was held in Erice, Sicily at the Ettore Majorana Centre for Scientific Culture, from September 26 to October 3, 1986. The purpose of this School is to review the physics accessible to experiments using low energy antiprotons, in view of the new era of the CERN LEAR ring opened by the upgrade of the antiproton source at CERN (ACOL). In 1986 the first course covered topics related to fundamental symmetries. These Proceedings contain both the tutorial lectures and the various contributions presented during the School by the participants. The con­ tributions have been organized in six sections. The first section is devoted to gravitation, a particularly "hot" topic in view of recent speculations about deviations from Newton's and Einstein's theories. Section II covers various problems related to the matter-antimatter symmetries such as comparison of the proton and antiproton, inertial masses or spectroscopy of antihydrogen or other antiprotonic atoms. CP and CPT violations in weak interaction are presented in Section III. The test of symmetries in atomic physics experiments and the strong CP problem are covered in Section IV. Section V groups contributions related to high prec~s~on measurements of simple systems like protonium, muonium or the anomalous moment of the muon. The last section is devoted to the experimental challenge of polar­ izing antiproton beams.