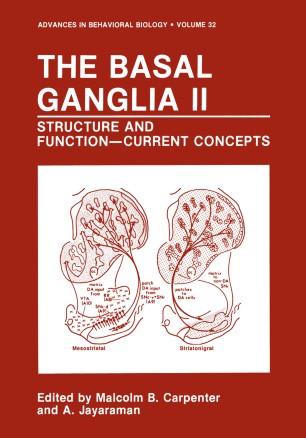 This volume was generated from papers presented at the Second Triennial Symposium of the International Basal Ganglia Society (IBAGS) held at the University of Victoria, British Columbia, July 21-23, 1986. The meeting was held as a satellite symposium following the XXX Congress of the International Union of Physiological Sciences at Vancouver. IBAGS was founded at a similar satellite symposium held in Lorne, Australia, organized by John S. McKenzie and sponsored by the University of Melbourne. The symposium held in Australia was attended by 50 scientists from 12 different countries. The results of the first symposium, edited by John S. McKenzie, Robert E. Kemm and Lynette N. Wilcock, were published by Plenum Press in 1984 under the title, The Basal Ganglia - Structure and Function. It was decided that the Society should meet on a triennial basis. The time and place for Second IBAGS Symposium were set by A.G. Phillips who served as Chairman of the Program Committee along with I. Divac, S.A. Greenfield and E.T. Rolls and J.S. McKenzie. Michael E. Corcoran of the Department of Psychology, University of Victoria served as the on-site coordinator and arranger for the Symposium. He was ably assisted by Ms. Morag McNeil who handled the details which made the meeting run smoothly.