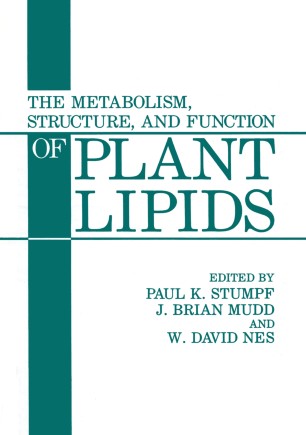 The Metabolism, Structure, and Function of Plant Lipids

The Seventh International Symposium on the Structure and Function of Plant Lipids took place at the University of California, Davis, California July 27th to August 1st, 1986. This was the first time the Symposium was held in the United States. The list of previous host cities reads, Norwich, Karlsruhe, Goteborg, Paris, Groningen, Neuchatel. The addition of Davis to this distinguished list was made by the organizers with the doubts of people who give invitations to parties - will anybody come? In fact 155 participants registered and there were 21 spouses in attendance. The scientific program was composed of nine sessions: biochemistry of isoprenoids and sterols, function of isoprenoids and sterols, structure and function of lipids, biosynthesis of complex lipids, fatty acid oxygenases and desaturases, medium and long chain fatty acids, interaction of university, government and industrial research, algal lipids, and genetics and biotechnology. In addition to these sessions of plenary lectures, there were four poster sessions in which about 140 posters were presented. All of this was packed into four days, and there was some comment about the scarcity of time to ask questions of the speakers, discuss the posters and even to eat lunch. The compression of the program was a result of the continued desire of the organizing committees to avoid concurrent sessions. The congregation of participants into a single session increases interaction and generates a feeling of unity at these symposia.