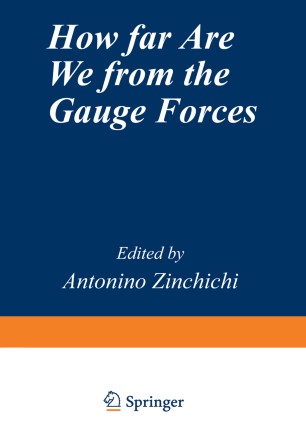 How Far Are We from the Gauge Forces

Part of the The Subnuclear Series book series (SUS, volume 21)

During August 1983, a group of 89 physicists from 59 labora­ tories in 23 countries met in Erice for the 21st Course of the International School of Subnuclear Physics. The countries repre­ sented were Algeria, Australia, Austria, Canada, Czechoslovakia, the Federal Republic of Germany, Finland, France, Hungary, India, Israel, Italy, Japan, the Netherlands, South Africa, Spain, Sweden, Switzerland, Taiwan, Turkey, the United Kingdom, the United States of America, and Yugoslavia. The School was sponsored by the European Physical Society (EPS), the Italian Ministry of Education (MPI), the Italian Ministry of Scientific and Technological Research (MRST), the Sicilian Regional Government (ERS), and the Weizmann Institute of Science. The programme of the School was mainly devoted to a review of the most significant results, both in theory and experiment, obtained in the field of the "electroweak" and of the "colour" forces of nature. The outcome of the Course was to present a clear picture of how far we are from the electronuclear formulation of these basic forces acting between quarks and leptons. And more generally, how far we are from the unification of all gauge forces of nature.