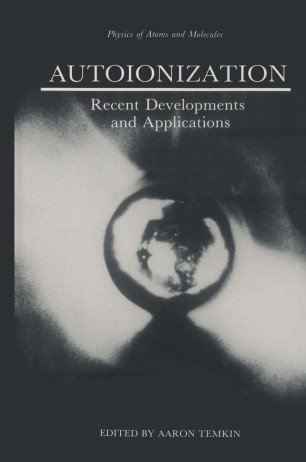 About five years ago, Professor P. G. Burke asked me to edit a sequel to an earlier book-Autoionization: Theoretical, Astrophysical, and Laboratory Experimental Aspects, edited by A. Temkin, Mono Book Corp. , Baltimore, 1966. Because so much time had gone by and so much work had been done, the prospect of updating the 1966 volume seemed out of the question. In 1965 the phenomenon of autoionization, although long known, was just starting to emerge from a comparatively intuitive stage of understanding. Three major developments characterized that development: In solar (astro-)physics, Alan Burgess (1960) had provided the resolution of the discrepancy of the temperature of the solar corona as observed versus that deduced from ionization balance calculations, by including the process of dielectronic recombination in the calculation; Madden and Codling (1963) had just performed their classic experiment revealing spectroscopically sharp lines in the midst of the photoionization continuum of the noble gases; and Feshbach (1962) had developed a theory with the explicit introduction of projection operators, which for the first time put the calculation of auto­ ionization states on a firm theoretical footing. There were important additional contributions made at that time as well; nevertheless, without going into further detail, we were able to include in our 1966 volume, in spite of its modest size, a not too incomplete survey of the important developments at that time. To do the equivalent now would be virtually impossible.