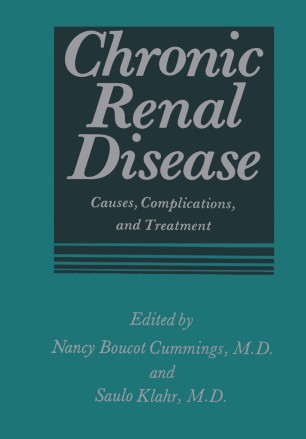 Chronic renal disease has received increasing attention and concern since the passage in 1972 of PL 92-603, which provided coverage for end-stage renal disease (ESRD) treatment by the federal government. The human and economic costs of the ESRD program serve to emphasize the need to prevent or to arrest those diseases resulting in chronic renal failure, since none of the available treatments is without complications and/or side effects. The ESRD program, the only federal one that provides coverage for a catastrophic illness for almost the entire population (those qualifying under Social Security), cost almost $2 billion in 1983. The escalating costs of the ESRD program are attributed to the increasing number of patients requiring treatment and have focused concerns of the United States Government, both Congress and the administration, on ESRD. The National Institutes of Health (NIH), especially the Kidney, Urology, and Hematology Division of the National Institutes of Arthritis, Diabetes, and Digestive and Kidney Diseases (NIADDK), supports a sizable research program that bears on chronic renal disease and in association with this has sponsored many conferences and workshops on research on and causes and complications of chronic renal failure. This book is an outgrowth of the issues addressed by participants at a number of NIH conferences held in the 1980s.