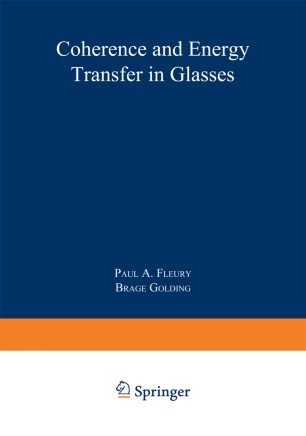 Coherence and Energy Transfer in Glasses

In recent years the physics of disordered systems has been one of the most active and fruitful areas of research in condensed matter science. In contrast to the considerable attention paid by conferences, schools and workshops to the static and structural aspects of glasses, there has been no forum devoted primarily to the dynamic and energetic aspects of amorphous solids. The NATO Workshop on Coherence and Energy Transfer in Glasses was organized to address this deficiency. The intent was to bring together in an intense and interactive environment, experts in several rather disparate subfields relating to the dynamics and energetics of disordered systems. This volume represents the Proceedings of that Workshop, which took place in September 1982 at Clare College of Cambridge University. Forty-three scientists from eight NATO countries participated. These included representatives from universities and industrial laboratories, as well as government research institutions. The meeting was organized into eight formal sessions and one informal session devoted entirely to unstructured discussion. Each formal session featured two comprehensive lectures. An additional 60 to 90 minutes was devoted in each session to discussions and contributions related to the lectures. Since only about 60% of the session time was devoted to formal presentations, the discussions formed an equally important part of the workshop. The chairmen and discussion leaders - as well as the workshop participants themselves - brought forth lively and illuminating discussions for each session.