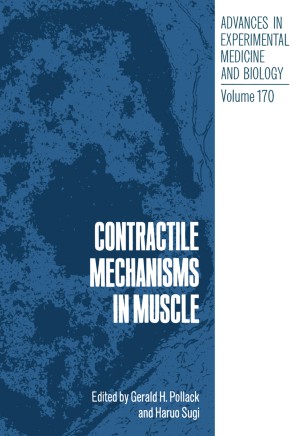 Part of the Advances in Experimental Medicine and Biology book series (AEMB, volume 37)

Prior to the emergence of the sliding filament model, contraction theories had been in abundance. In the absence of the kinds of structural and biochemical information available today, it has been a simple matter to speculate about the possible ways in which tension generation and shortening might occur. The advent of the sliding filament model had an immediate impact on these theories; within several years they fell by the wayside, and attention was redirected towards mechanisms by which the filaments might be driven to slide by one another. In terms of identifying the driving mechanism, the pivotal observa­ tion was the electron micrographic indentification of cross-bridges extending from the thick filaments. It was quite naturally assumed that such bridges, which had the ability to split ATP, were the molecular motors, i.e., that they were the sites of mechanochemical transduction. Out of this presumption grew the cross-bridge model. in which filament sliding is presumed to be driven by the cyclic interaction of cross-bridges with complementary actin sites located along the thin filaments.