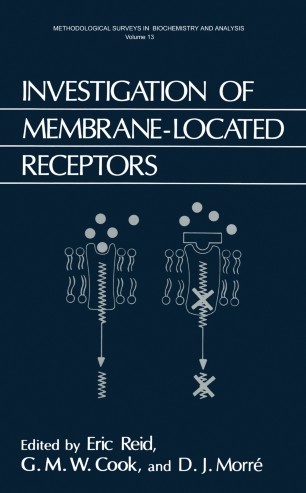 Part of the Methodological Surveys in Biochemistry and Analysis book series (MSBA, volume 13)

Prefaces tend to be platitudinous and unconducive to perusal. To this hardened Editor, the appearance of the book represents the end of a stamina-testing saga surpassing any past experience. Amongst the numerous authors - a notably eminent bevy - some were angelic and others suffered harassment to produce, amidst day-to-day pressures, an eventual article in the cause of receptor investigation; few took exception to the strong editing that their material underwent. The reader of this book will be interested rather in its aims and ba- ground.- Does it merit a n his bookshelf? The book is not a 'Proceedings', but has sponsored-meeting parentage. Wi th company support, notably from BetaHED Pharmaceuti­ cals of Indianapolis, the 8th International Subcellular Hethodology Forum was held in July 1982 at the University of Surrey in Guildford. The vigorous debates, partly on aspects such as hormonal receptors and drug targeting, then narrowed to Neuroreceptor Hethodology at a NATO Advanced Research Workshop, perforce set up at short notice. But 'Proceedings' are proverbially ephemeral material reflecting an array of solo performances, whereas this book is hopefully more like an orchestra's performance, of classical together with new material. Retrievability of receptor 'know-how' has been a key aim. Locations in the text, including comments and supplementary material (designated 'NC'), are thoroughly indexed, whilst for some aspects a 'Retrieval Key' (p. 545) should be used. Related to receptor methodo­ logy, receptor features and phenomena get due attention in the text.